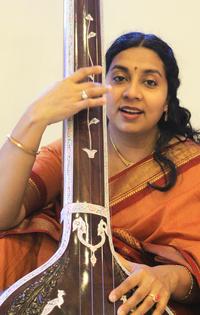 Dayita Datta is a performer, educator, collaborator and an ardent advocate of Indian Classical music.  She has strong background in both Indian and Western Classical music which helps her appreciate the intricacies across the two very different music genres and play an active part in their assimilation. She strongly believes that cross art form initiatives are significant for growing population of global citizen, besides being self-satisfactory in expressing one's own creativity.

Dayita's interest in cross art form of music has drawn inspiration from the great musicians and composers like Philip Glass, Pandit Ravi Shankar, to name a few. The ancient rich cultural form of Indian music infused with different color of Western music instruments encourages her as a performing artist to collaborate with musicians of various genres to create music enjoyable for a far reaching audience. Her musical ideas originate from the innate desire to come up with unique piece of arrangements which are not only rich with core musical elements but connects at spiritual level.

She has been performing and teaching Indian Classical music to school age children as well as adults across the San Gabriel valley area in Southern California for over a decade. Some of her key performances have been at Music Circle, a premier North Indian Classical music organization; California State University, Los Angeles; Los Angeles County Museum of Art; University of California, Santa Barbara; James Armstrong Theater; Pasadena Conservatory of Music; Los Angeles Grand Performances, to name a few. Dayita has been teaching music to student of all ages for last few years and is the founder of "Shruti Music Academy", a musical organization geared at promoting North Indian Classical vocal music across  Southern California. She and her fellow musicians from different genres collaborated as part of a project called "Raga Essence" and performed at prestigious event - Pasadena ArtNight in the Spring of 2016.

Dayita strives to play an active part in spreading the awareness of North Indian Classical music across the diverse local communities and build a strong support base with deep appreciation of this rich ancient traditional art form.